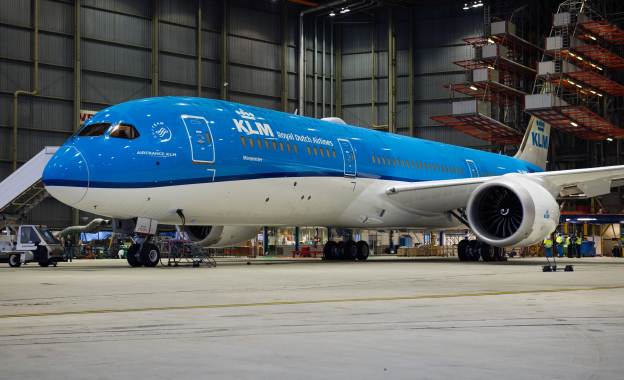 On 26 January, KLM Royal Dutch Airlines welcomed its eleventh Boeing 787-9 Dreamliner at Schiphol Airport. The aircraft landed on 26 January from Seattle in the US. It will bear the name Morgenster – Dutch for “Morning Star.”

Once again in 2018, KLM will continue to invest in the renewal of its fleet to meet its customers’ needs and wishes. The Boeing 787-9 Dreamliner Morgenster is the first aircraft to arrive in 2018. KLM will take possession of its twelfth Dreamliner in April.

The Boeing 787 creates less ambient noise, consumes less fuel, and gives off fewer carbon dioxide emissions. It brings us ever closer to our aim to reduce CO2 emissions by 20% in 2020 compared to 2011. The Dreamliner is built mainly of carbon fibre composite which can be cut easily, so the manufacturing process creates less waste.

It also offers numerous advantages in terms of passenger comfort. The increased cabin air pressure helps passengers to arrive at their destination feeling well rested. And all passengers have access to WiFi during the flight.

The Air France Boeing 787: 10 destinations to explore the world!

Air France has already taken delivery of two Boeing 787s & will receive three more by the end of the year. They will serve 10 destinations around the world

KLM welcomed a record 32.7 million passengers aboard its flights in 2017. The greatest rise was in Europe.