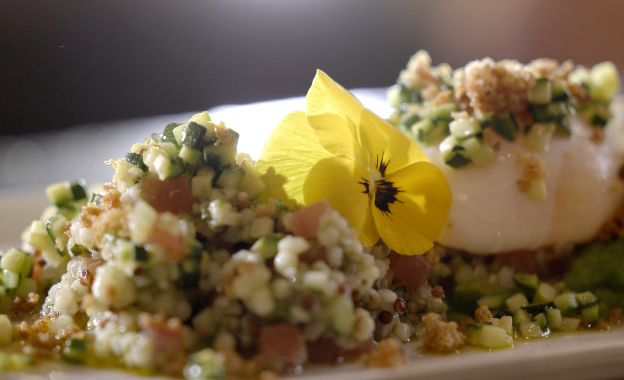 From March to June 2022, Air France is teaming up with three top French chefs to create the dishes offered on board its flights. On the airline's medium-haul network, in the Business cabin, François Adamski will be unveiling delicious and original recipes. On long-haul flights, Anne-Sophie Pic has signed the La Première menu and Régis Marcon is offering new menus in the Business cabin. These are all great names in the world of French haute cuisine, which is being showcased around the world.

Culinary delights by François Adamski in the medium-haul Business cabin

Servair corporate chef François Adamski, Bocuse d'Or and Meilleur Ouvrier de France, is offering Business customers on the Air France medium-haul network tasty new dishes this month. For the occasion, the chef is revealing the recipe for his "poached egg at 30,000 feet".

Sautéed prawns, slices of Charolais beef and salmon with basil complete this new cycle of dishes on offer over the next few months, on flights to and from Paris. Attached to traditional French produce and to sustainable food sources, François Adamski has selected products from France to create healthy and well-balanced menus with a focus on well-being and pleasure.

Air France has also teamed up with Anne-Sophie Pic and Régis Marcon to sign the menus for the La Première and Business long-haul cabins on departure from Paris. With a selection of vegetarian, red or white meat or fish dishes, the French Michelin-starred chefs have come up with refined dishes for the airline's customers to discover progressively this season.

Triple Michelin-starred chef Anne-Sophie Pic has created a starter and six main dishes for the airline's most exclusive cabin. Rolled and snacked sole "à la plancha", smoked goat's cheese ravioli and coffee-smoked beef fillet are just some of her dishes to be enjoyed on board.

The triple Michelin-starred chef Régis Marcon has come up with 8 exceptional dishes to be enjoyed in the Business cabin, such as duck lasagne with blackcurrant sauce, blanquette of salmon and Pollock in sherry jus. 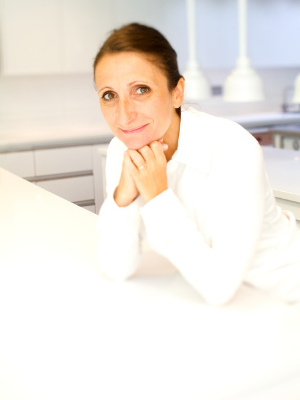 After studying management, Anne-Sophie Pic returned to Valence, her hometown, and finally decided to devote herself to her true passion: cooking. In 1991, she took over the gourmet restaurant "La Maison Pic" from her father. With "La Maison Pic", she became the first French woman with three Michelin stars for an establishment in France. She owns 7 other restaurants, making her the most starred female Chef in the world with 8 Michelin stars.

In addition to her many stars in the Michelin Guide, these values have enabled her to win several awards, such as the 2011 Veuve Cliquot prize, San Pellegrino World's 50 Best Restaurants Awards, which named her the best female chef in the world.

With a Bocuse d'Or and three Michelin stars, Régis Marcon embodies a distinct part of French gastronomy: more than a style or a time, his dishes above all symbolise the nature that surrounds him and tells his story. Between Ardèche and Auvergne, between plains and mountains, between Velay et Vivarais, Régis Marcon knew how to anchor the roots of his cuisine in a familiar and family land from which he always knew how to take the best to create a genuine and delicious cuisine. Since taking over the family hotel restaurant in 1979, and without ever leaving his hometown of Saint-Bonnet-le-Froid, Régis Marcon has established himself as one of the greatest chefs of our time by showcasing the products of his region, in particular mushrooms and green Puy lentils. 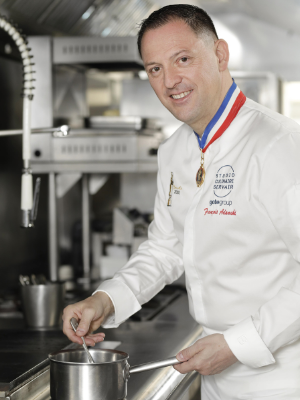 François Adamski trained in the kitchens of the Hôtel de Matignon, then at the Plaza Athénée, the Ritz, the Maison Prunier and the Hôtel Intercontinental. In 2001, François Adamski won the Bocuse d'Or, and in 2007 became Meilleur Ouvrier de France. After six years working at the Abbaye Saint-Ambroix in Bourges, where he maintained the first Michelin star obtained by his predecessor, he headed west in 2009 to Bordeaux. He took over the management of Gabriel's kitchens, in a private hotel, Place de la Bourse. Thanks to his perfect mastery of the great French classics, he was awarded his first Michelin star. In 2012, his sense of commitment to the profession and his desire to pass on his knowledge led him to become president of Team France Bocuse d'Or until 2020. In 2021, he was appointed vice-president of the Toques Françaises. At the beginning of 2019, François Adamski set himself a new challenge by joining Servair, the leading French airline catering company, as Corporate Chef. His mission was to promote the company's culinary identity and encourage the sharing of know-how. He also holds the position of Secretary General of the Servair Culinary Studio, a creative laboratory made up of starred chefs and culinary experts, and in this capacity is in charge of the company's culinary innovations.

New Air France route between Nice and London in summer 2022

Air France will offer a daily flight between Nice (NCE) and London (LHR) this summer.

Air France will resume its flights between Paris Charles de Gaulle (CDG) and Ho Chi Minh (SGN) as of 29 March 2022.

Fly this summer with Air France to the United States. Air France plans to continue to increase capacity on US routes.