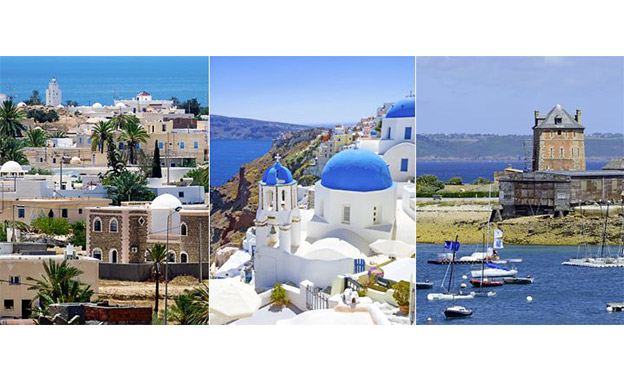 Gentle Djerba
Just a stone’s throw away from Europe, this small Mediterranean paradise entices travellers with its gentle climate, sunshine and sea. Offering a host of leisure activities and escapades, sightseeing and relaxation, palm and olive trees, Djerba is perfect for getting away from it all. Its mythical origins and colourful old town Houmt Souk also make the Tunisian island a truly unique getaway destination.

Vibrant Thessaloniki
It’s easy to fall in love with Thessaloniki as you follow its ancient walls and ramparts and discover the upper city of Ana Poli and Byzantine churches. Its architectural and cultural heritage can be discovered on foot, day and night. And to complete your sense of oneness with the city, what better way than relaxing at a cafe terrace, enjoying the gourmet delights and visiting one of the markets before admiring the sunset from Trigonion Tower.

Santorini, the pearl of the Cyclades
With its myriad shades of black, Santorini never fails to charm. From the clifftops, its whitewashed houses and blue-domed churches overlook the sea. An outstanding natural vista. And for an even more authentic experience, an archeological site, exceptional hikes and fine dining are among the treasures waiting to delight the island’s visitors.

Magnificent Mykonos
Alone or with a group, with friends or family, Mykonos has something for everyone. This Greek island, famous for its nightlife and beaches, also oozes charm. Among its cascading whitewashed houses comfortably nestled between blue skies and the turquoise sea, the island’s soul – that of a traditional fishermen’s village - is intact.

Brest, historic port on Brittany’s coast
The proud port city of Brest is the ideal starting point for discovering Brittany, an exceptional region facing the sea. Brest, a city of character, isn’t exactly glamorous and doesn’t have a wholesomely refined image, instead cultivating a somewhat rock’n’roll lifestyle. Its array of alternative galleries, music scenes and trendy restaurants have one thing in common – a typically Breton passionate streak, almost verging on rebellion, flows in abundance in this coastal city, reinforced by foreign sailors’ tales of seafaring adventures. A natural maritime playground.

Calvi, the garden of Corsica
From its narrow streets to its Genoese citadel, Calvi offers spectacular views. At the water’s edge, fishermen’s boats are moored in the colourful marina. This island beauty spot, bordered by 6km of white sandy beaches, boasts turquoise waters and mountains in a peaceful setting.

Sunny destinations in the spotlight

Alongside these new routes, Air France will offer additional flights from its two Parisian hubs -

Air France is inviting its Business customers and Flying Blue Elite Plus members to discover its new lounge in terminal 3 at Paris-Orly airport.

Air France continues the move upmarket of its products and services. The airline is today unveiling its new cabins available on board its Boeing 777-300.

Fly off to Monrovia with Air France

Air France customers will once again be able to travel to Monrovia thanks to five weekly flights operated by Airbus A330-300 with a capacity of 224 seats.