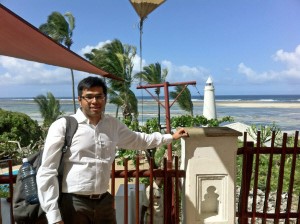 IDS Next is an Indian software company that delivers intelligent management systems that allow hospitality businesses to manage their vast data pools tactfully. The company is well-established in India, Asia and the Middle East, and entered the African market late 2012. Club Africa member Ranjit Ramachandran explains how he and his colleagues keenly team up with African companies to penetrate the African continent.

Even though IDS – or Intellect Data Systems – Next operates in 40 countries already, it does not shy away from Africa. Ranjit: “We believe Africa houses some of the biggest next growth economies. While economic downturn significantly affected Europe and other regions in the world, Africa remained unscathed by this crisis. Moreover, as a company we operate in an industry that is intricately tied up with tourism. Hospitality and tourism directly relate. Because the future projects an influx of arrivals on the continent, Africa’s prospect tourism opportunities are unprecedented. IDS Next wants to be at the forefront of these developments, anticipating a wave of tourist inflow.”

But targeting an entire continent at once is easier said than done, Ranjit experiences first-hand: “Especially because we are an Indian company, we do better leveraging our strength via partners. In fact, in each African country we work in, we join forces with at least one partner. We maintain a small office in Nairobi, but do not sell directly. It is through our distributors and channel partners that we ensure the success we achieved within little short of a year time. The primary reason that justifies a risk-sharing model like ours is the exceedingly high costs of business, which had incurred had we decided to run African branches ourselves. By leaning on local companies we bypass the logistics undeniably associated with doing business, such as recruitment and housing.”

To IDS Next, moving into Africa is a twofold effort. “Before we came”, says Ranjit, “as well as now that we arrived, IDS Next’s pre-sales team that operates from India is a rather valuable resource to us. The team approaches potential partners and adds in-depth desk research. At the same time, by the brand we are, African companies approach us. Like this, we have now moved into Kenya, Tanzania, Uganda, Rwanda and Zambia in East Africa; and Ghana and Nigeria in West Africa. Our next financial year will lead us to South Africa, and eventually our strategy is to cover all of Africa.”

But not all partnerships are as successful, nor are operations equally opportune across all countries. “IDS Next provides intensive training for its partners, as well as closely supervises product implementation. At the end of the day, partners should be able to operate independently. At this point, we are still in the phase of handholding them. In addition, we face challenges such as the absence of reliable hardware and power infrastructure, driving up the cost of investment. Still – we believe, and have already experienced, that Africa’s business opportunities outweigh its obstacles.”