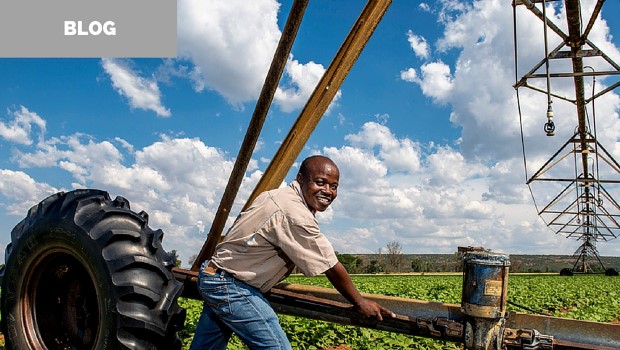 Even though a growing amount of South African land is being transferred from white into black hands in recent years, becoming a commercial farmer is quite a struggle. A mentor system and accompanying machinery pool are being set up to improve the situation.

While fields are almost being scorched in the hot sun, a widespread irrigation system sprays water over thousands of green plants. Due to the history of apartheid in South Africa, the majority of commercial farmers are still white South Africans. But more and more black South Africans are now attempting commercial farming as well. Like Lukas Masango (65), who is running a farm in Rust de Winter, on the border between the provinces Gauteng and Limpopo in the northeast of South Africa, and is owner of this second-hand irrigation system. He’s been a farmer since 1992 on land he received from the government, though the land still belongs to the state.

“Twenty years ago I decided to sell my own driving school to become a livestock and crop farmer”, Masango says. With the money, he bought two large second-hand irrigation systems, but life as a commercial farmer has proven to be very challenging since then. “It’s impossible to find a bank that will provide a loan and the government doesn’t support us in any form”, the farmer complaints.  Masango is one of the lucky few owning second hand equipment, considering the fact that most black farmers have no access at all to technical machinery. 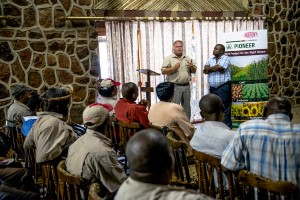 A lack of business sense seems to be another disadvantage. To illustrate, Masango started to plant corn, sugarcane and melons only to realize during harvest time that he had forgotten to identify customers to buy his products. It almost ended in bankruptcy. "Planning has never been part of our culture. We just start doing and don’t think ahead," his son Bongane Mocoi (27) tells with a big smile, who nowadays runs the farm together with his father.

A swimming pool for someone who can’t swim

“It’s like giving a swimming pool to someone who can’t swim. That person will drown”, Willem Basson says while dozens of black farmers enter the room behind him to attend a course discussing the subject of producing seeds, organized by Basson in collaboration with DuPont Pioneer, the world’s leading developer and supplier of advanced plant genetics.

‘Education’ is the keyword, according to Basson who’s vice-president of the agricultural organization AgriGauteng. He is setting up a training facility that will provide education to 1200 black farmers, it will connect each farmer to a personal mentor and it will provide a machinery pool for farmers to lease technical equipment like tractors, plows and irrigation systems.

Financial management class is an eye-opener

Especially the class about financial management was an eye-opener for Mocoi, who follows Bassons classes with his father. “To start looking for a market first, than calculate your production costs and only then plan how many crops to plant, is a new way of thinking for me”, the young farmer says.

‘Agriculture is our shared culture’

His father is specifically looking forward to finally start farming using a modern tractor. “I have a second-hand tractor that´s quite old, and if you plow 50 hectares of field, by the time you’re finished, the grass starts growing where you started,” he chuckles, shaking his head.

Basson will also assist farmers in writing business plans and is currently negotiating with several ministries and companies to accomplish sustainable funding. “We have many different cultures in South Africa but one culture binds us all and that’s agriculture."

Risks and opportunities for agribusiness in Mozambique

Foreign investors are lining up for Mozambique’s enormous coal reserves and offshore gas fields. But the country also has enormous agricultural potential.

Dutch company DADTCO has developed a mobile factory providing a solution to the problem of cassava roots perishing during transport over long distances.