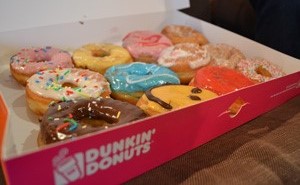 Dunkin’ Donuts has opened its first store in South Africa. In Cape Town, the first outlet was launched, with four more to be opened before the end of 2016. Other stores will open soon in Johannesburg; the donuts and coffee chain plans to have 290 stores in South Africa in 2026.

Bloomberg reports that the operator of the franchise stores wants to expand the brand into six more countries in Southern Africa. In Johannesburg, the company intends to compete directly with US rival Krispy Kreme Doughnuts, which already has a presence there.

Dunkin’ Donuts is following other chains such as Pizza Hut and Starbucks, in entering South Africa in the past two years, seeking to tap growing consumer demand for fast-food. More brands are underway. This year, the country’s first Baskin-Robbins ice-cream store will be opened.

Image by Hao dream-case [CC BY 2.0], via Wikimedia Commons

Most people in Africa prefer to drink tea, but not Ethiopia. In 2015, 127,000 tonnes of coffee was sold for local consumption in this country.