IBM is actively expanding its operations across Africa. Not only has the company set up offices in Angola, Mauritius, Tanzania, Senegal, Ghana, Nigeria and Kenya in the past five years, recently it also opened the continents first IBM Research Lab in Nairobi. “To leapfrog other continents, Africa needs clever, technological inventions.”

Young African men and women are discussing formulas and tables, incomprehensible to a layman, sitting in front of a white board in one of the meeting rooms of the IBM Research Lab in Nairobi. The researchers are going over the latest updates to the by IBM developed Twende Twende app. This mobile phone application gives Kenyans the opportunity to receive traffic information for Nairobi, a highly appreciated tool in one of the busiest capitals of the continent. (Twende means ‘Let’s go’ in Swahili).

“In the meantime we’re also working on a tool that measures road quality”, says researcher Aisha Walcott Bryant from behind her laptop. “When you drive around in your car with a mobile phone with the most recent version of our application, it will automatically detect if you slow down, just went over a speed bump or drove through a pothole.” The research lab could then share this information with the Kenyan road authority to use it for the planning of road maintenance and new infrastructure.

“This continent cannot afford to follow the same linear growth that Europe has seen”, claims Kamal Bhattacharya, director of IBM Research Africa and vice-president of the Research Lab in Nairobi. “That would take two hundred years and we don’t have that time. Africa therefore needs clever, technological inventions to leapfrog other continents.”

Bhattacharya himself is extremely enthusiastic about the Dr. Watson project. Watson is a by IBM developed supercomputer capable of answering questions using spoken word recognition pulling information from encyclopedias, books, journals, articles and websites. The cognitive computing system gained world fame when it managed to beat two of the best candidates in the famous American TV quiz Jeopardy in 2011. The laboratory in Nairobi currently investigates how to start using this robot in the African healthcare.

"Africa will never have enough doctors," states Bhattacharya. “But with Dr. Watson, nurses and health workers can be trained more quickly and get access to the most up-to-date health care information in the most remote areas of this continent. While the supercomputer will never replace a doctor, it might be able to push the African healthcare to a higher level in a short period of time.”

Lots of potential for cloud computing in Africa 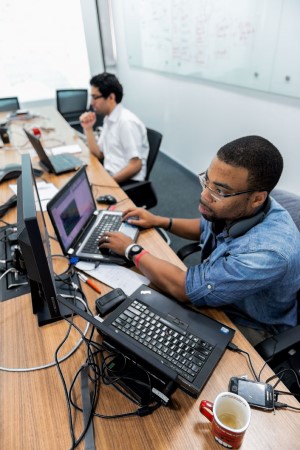 The data that Watson will use, won’t be on computers or phones in the clinics, but in a digital cloud that will refresh continuously. IBM sees a lot of possibilities for cloud computing – also for the African continent – and therefore built an enormous high-tech data center with big pureflex servers in the lab in Nairobi.

After Kenya, IBM will soon open more research labs in West- and Southern Africa, though Nairobi will continue to hold the main laboratory. “We chose Kenya because of its growth prospective and the well-developed business ecosystem of innovators and universities.” Although the lab recruited most of its staff in America, the lab vice-president states “But 75 per cent of them originally come from Africa”. The lab also provides internships to fifteen local and ten international students. Bhattacharya: “If you want to do business in Africa, your first and best investment should be in local talent and then letting them grow. Otherwise your enterprise doesn’t have a future.”

Philips innovation hub in Nairobi will be the place where African researchers create new inventions and can bring them to the market.