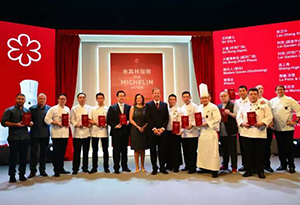 Michelin has launched the first edition of its famous restaurant guide on the Chinese mainland: the Michelin Guide Shanghai 2017. Many top-tier restaurants received one or two stars, including a Cantonese establishment with just six tables.

Shanghai is the latest Asian city to feature in the guide following the launch of Hong Kong, Taipei and Singapore editions. The guide awarded two stars to seven restaurants with a variety of Chinese cuisines. Michelin gave two stars to another 18 restaurants. According to the Shanghai Daily, T’ang Court restaurant in Xintiandi was awarded three Michelin stars for its “exceptional cuisine, worth a special journey”.

Michelin has pointed out that the criteria applied by its inspectors include the quality of ingredients, the chef’s personality as revealed through cuisine, the preparation and combination of flavours, value for money and the ability to produce excellent cooking with consistency over time and across the entire menu.

What first-time visitors need to know about Chinese food

Sara Naumann offers an introduction to the varied cuisines of China for first-time visitors, with mystery vegetables that don't even have names in English.

Are you talking to the right person?

While negotiating a business deal or a future partnership, you may ask yourself if you are talking to the right person. We asked our Club China experts.