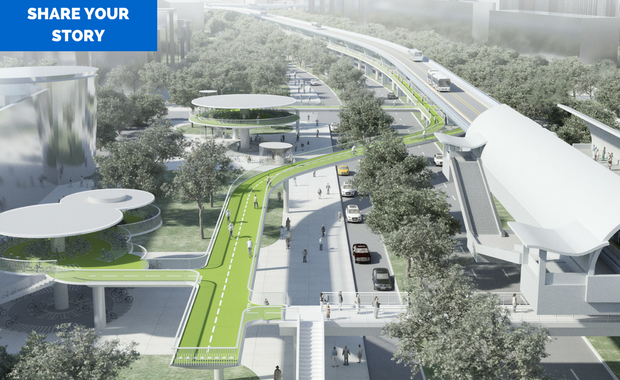 The city of Xiamen, in the south-eastern Fujian province, has just completed China’s first 7.6-kilometre long ‘cycling skyway’. “Its main purpose is to decrease traffic congestion and to promote greener and more sustainable forms of transportation. We believe that it will not be the last of its kind in China”, says Steen Savery Trojaborg, CEO of DISSING+WEITLING, the Danish firm that designed the skyway, to Club China.

The Bicycle Skyway is a 7.6-kilometre long cycling route that runs 5m above the road, just below the bus rapid transit line in the city’s downtown. “To our knowledge, it is the first skyway exclusively for bicycles in China. At least on this scale”, says Steen Savery Trojaborg as he gets ready to try out the route that his firm designed for the first time.
Xiamen’s municipal authorities hired his company to find viable mobility alternatives for buses and cars.

How did you provide proof that this Bicycle Skyway would solve (some) of their problems?
“The city of Xiamen had expressed the need for a solution of this kind. There was a pronounced need for something of this magnitude. A safe bike path that gives its users a joyful experience of overlooking the city was an obvious way to promote biking. It’s all about ease-of-use and joy-of-use.”
“It all depends on the urban context of the city. In Xiamen, there was an obvious possibility of building a skyway for bikes in connection with the existing public transport system, an elevated Bus Rapid Transit line, which runs along a green corridor in the midst of the city’s wide boulevards. We saw the potential of using the available space there. At the same time, it connects to and integrates with the existing public transportation system via bicycle parking hubs in relation to the public transportation stations. It’s smart mobility.”

Some cities would prefer integrating bicycle ways into their current road infrastructure. This seems easier and less drastic. Why is the Bicycle Skyway the better solution?
“It is important to stress that both the Xiamen Bicycle Skyway and the Cykelslangen bicycle bridge in Copenhagen are particular site-specific solutions to particular site-specific challenges. They are not an attempt to establish a system of elevated bicycle routes as such or always separate cyclists from the ground level. Wherever it is practically possible, bicycles should preferably be an integrated part of the urban landscape. But sometimes clever short cuts like Cykelslangen or elevated bike paths like the one in Xiamen proves to be the most joyful solution for both bicyclists, pedestrians and other traffic.”

“Even when people are on their best behaviour, bad or insufficient city planning can create tense situations. However, clever urban planning and good design can relieve these tense and potential hazardous infrastructural situations and create positive urban side effects. Solutions like Cykelslangen and the Xiamen Bicycle Skyway not only facilitate mobility and connectivity in a city, but they also add to the city’s visual fabric and enhance the vibrancy of their urban space.”

“In Denmark and the rest of Europe we integrate bike infrastructure into our urban context by taking away space from the cars. This has been an on-going tendency for the past decade and it’s a positive thing. The Xiamen Bicycle Skyway is a better solution for its particular urban context because the infrastructural system there is not planned for bicyclists at all. And from a social point of view, it’s not an isolated object. It connects directly to shopping centers, public buildings and public transportation hubs in a way that is particular to the larger Asian cities, where urban life unfolds on several levels.”

Do you see a market for the Bicycle Skyway concept in China?
“Based on the immediate public success and many positive responses from the users of the Xiamen Bicycle Skyway, we believe that it will not be the last of its kind. Solutions like this can relieve some immediate infrastructural challenges in the dense urban fabric of certain major cities around the world. It’s about facilitating mobility or relieving infrastructural tension in a particular area of a city while adding something extra to a city’s identity or creating a more vibrant and enjoyable urban space. Again, the best bicycle infrastructure solution for a certain city always comes down to each city’s particular urban context.”

In 2004, Yellow Valley was the first fair trade Gouda cheese producer in China. It is now trying to reach a bigger market via WeChat and TaoBao channels.

Happy Finish is ready for VR revolution in China

2016 could be the global breakthrough year for virtual reality and Chinese brands may be among the early adopters.