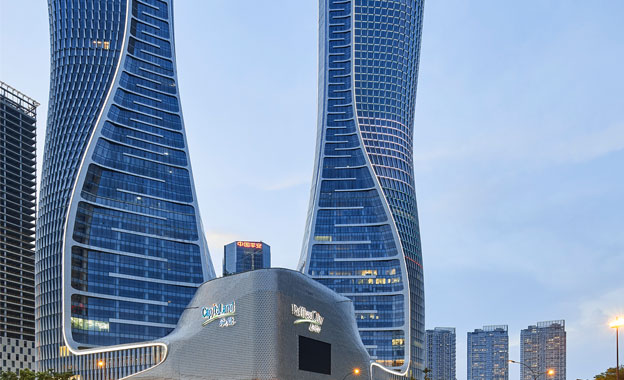 Imagine a city within a city. A large, beautifully designed hub where tens of thousands of people live, work and have fun. China now has eight of these so-called Raffles Cities, the latest was opened in Hangzhou. Designed by UNStudio, the new Raffles City is a sustainable urban hub, a 400,000m2 landmark in two towers with 24/7 activity. Club China asked Ben van Berkel, UNStudio’s Founder and Principal Architect, about the project.

Like the other Raffles City developments in Shanghai, Beijing, Chengdu, Ningbo, Shenzhen and Chongqing, Raffles City Hangzhou is an iconic landmark. It is, to date, the largest Raffles City development in China completed by Singapore-based CapitaLand. One could lead a full life inside, as the new two-tower megacomplex offers a shopping mall, lots of offices, a Conrad Hotel by Hilton, serviced residences and residential apartments. After winning the bid for the design of the hub Netherlands-based Ben van Berkel/UNStudio went to great lengths to create not only the biggest Raffles Center to date, with two sixty-storey, 250 metre-tall highrises, but certainly the best – in many ways.

The concept of this Raffles City was conceived as a lively vertical neighbourhood on a 116,000m2 podium that accommodates retail, restaurants, leisure facilities and parking. Combining all of these different activities in one liveable, healthy hub with a high quality of life was a challenge. It is also a transit hub, as it has a direct underground connection to the metro. The towers are awe-inspiring, with a striking design. Reflecting the movement in the river, the tower design features a wave-like motion. As UNStudio explains the shapes and features of the towers: “These concentric waves increase in their dynamism, starting calmly at the base and building up more vigorously along the vertical axis.”

Raffles City Hangzhou uses natural ventilation on a large scale and has achieved Gold LEED certification, a mark of excellence for high-performance ‘green’ buildings. The incorporation of natural ventilation, solar gain and daylighting principles tailored to the local context, efficient structure and the ways in which materials are employed all work in concordance with one another to lower the energy and material demands of the building.

Hubs like these are scarcely found in Europe, but China has several of these outstanding projects. What what drives the demand in China for this kind of hub?

Ben van Berkel: “These large-scale mixed-use hubs are uncommon in Europe and the U.S., and they are becoming increasingly common in Asia. I believe however that as densification becomes a more urgent issue for cities all over the world, these kinds of projects will become much more commonplace.”

“In China the demand is driven by an already existing urgency, caused by rapid urbanisation and urban renewal. Cities have become so extremely packed that the existing city structures can no longer cater to the needs of future development. As a result, old buildings and districts are being renewed and this redevelopment brings new industry structures, cultural environments and creates demand for an improved urban lifestyle: people are looking for different and unique experiences when it comes to living, working and socialising. When space is scarce in the city, a multipurpose, localised and sustainable hub can facilitate city development, improve people’s quality of daily life and create high economic value.”

How did you mix the different uses in this ‘city within a city’ and make the hub liveable? “We actually really enjoy designing these projects, probably because they do present so many challenges on so many different levels. To mention a few: the integration with existing nearby infrastructure and public transport nodes; the seamless integration of public programs at street level and (at times) up into the buildings; the organisation of complex flows and separate access to the different programs within the towers. In addition to these design-related challenges, architects also have to work in line with economic considerations, planning and policy regulations and, last but not least, the overall design must express the unique identity of the host city; something that links to our urban experience, emphasises the uniqueness of a place and becomes part of the city’s identity.”

“The most role of the architect is however to add value – not least with a view to designing for the future. As such, each of the separate program typologies in a mixed-use development requires in depth knowledge of all related tendencies, trends and projections, while the design must principally be user-centric, providing quality of space and flexibility for future change and the integration of new technologies. We have to design welcoming spaces that people will want to return to again and again. In short, we need to design efficient models that are in line with the client’s plans, alongside performative, relevant architecture that attracts.”

After having created this landmark, what plans do you have for UNStudio in China?

“Our goal is to expand with the same high quality of work we have achieved in our Chinese projects so far. We really hope to carry out more cultural, mixed-use and infrastructural projects, hopefully also an airport. These are the ambitions that are still on our list.” Hangzhou opened the new Blockchain Industrial Park is the first dedicated blockchain business center in the world, with ten tenants.

Hangzhou, capital of Zhejiang Province, has launched favourable terms and incentives to foreign students and entrepreneurs.