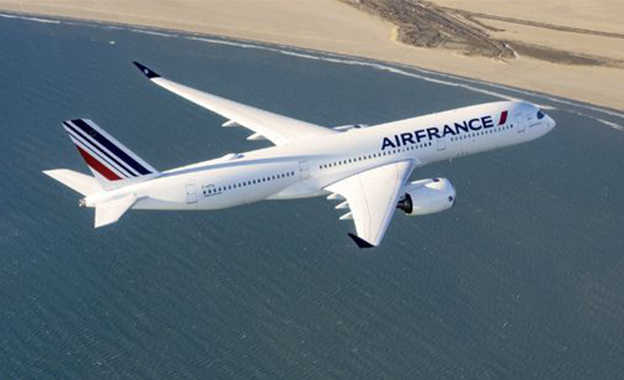 A new phase in its fleet modernization strategy

On September 27, 2019, Air France took delivery of its first Airbus A350 at the Airbus delivery centre in Toulouse (France).

This new more environmentally-friendly latest-generation aircraft is equipped with 324 seats, with 34 in the Business cabin, 24 in Premium Economy and 266 in Economy.

Air France's Airbus A350 will make its first commercial flight on October 7. It will be gradually deployed to 6 destinations in 2020.

For Anne Rigail, CEO of Air France, “The arrival of a new aircraft is always a unique and highly emotional occasion in the life of an airline. Along with all Air France staff, we are extremely proud to welcome the Airbus A350, one of the world’s most efficient long-haul aircraft in terms of environmental, economic and operational performance. As from October 7, our customers will be able to discover optimal comfort and service on board these new cabins.

The arrival of this first A350 marks a new phase in Air France’s fleet modernization strategy. Within 5 years, more than half of the company’s fleet will be made up of new-generation aircraft!"

An asset for reducing our environmental footprint

For many years, Air France has been committed to reducing its environmental footprint by implementing concrete actions – weight reduction on board, reducing and recycling waste, promoting eco-piloting, reducing the noise footprint, reducing and offsetting CO2 emissions and eliminating single-use plastic items.

Nonetheless, the main lever for reducing our environmental footprint remains our fleet modernization today symbolized by this very first A350.

This aircraft consumes 25% less fuel (i.e. 2.5 litres per passenger/100 km) thanks to the incorporation of materials which are up to 67% lighter – 53% composites and 14% titanium. In addition, its noise footprint is reduced by 40%.

Air France has decided to partially power the Airbus A350 ferry flight between Toulouse and Paris-Charles de Gaulle with biofuel. This initiative underlines the importance of biofuel for the aviation sector and Air France’s commitment to contributing to its development.

To mark the occasion, Air France is returning to its tradition of naming its aircraft. After consulting its staff, the company has decided to celebrate emblematic French cities.

This first Airbus A350 is therefore being named “Toulouse” by Anne-Marie Couderc, Chair of Air France-KLM and Air France and the aircraft’s sponsor. The capital of aviation par excellence, Toulouse is also the birthplace of this new aircraft that is joining the company’s fleet. Moreover, Air France has been serving Toulouse since the company’s creation in 1933.

Air France is thus promoting France, its culture and history throughout the world.

Air France is meeting the needs of its increasingly connected customers by offering them its services on different vocal assistant platforms.

Air France launches live tv on board, in partnership with France 24

Air France launches live tv on board, in partnership with France 24. The company’s customers have had complimentary access to TV channel full live content.