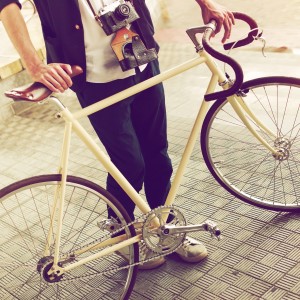 Do you love biking while you are on a business trip? At many places around the globe you can now bike around the airport. The recently opened bike track around Bangkok’s Suvarnabhumi Airport was listed by CNN as one of the five best airport bike paths in the world.

The other four airport bike tracks in the top 5 are Kastrup Airport in Copenhagen, Lanzarote Airport on the Canary Islands, Vancouver International Airport and Manchester Airport in the UK.


Suvarnabhumi Airport’s ‘exclusively-designed’ bike path runs along the flood-prevention barrier circling the airport. The cycling path is part of a service perimeter road that was used when the airport was under construction.

Airports of Thailand repaired the road for leisure cyclists. Originally, the cycle route was opened to serve 300 to 500 cyclists who were already biking around Suvarnabhum Airport, but the numbers are said to have gone up. The green-painted road surface is covered with a para rubber coating to prevent slips and handle all weather conditions. The track is open daily from 0600 to 1800.

Don Mueang Airport, the other airport in Bangkok, also has a relationship with sport. It was the first airport in the world where golfers can tee off between the runways on an immaculate 18-hole course.