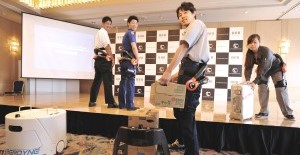 If you are travelling to Tokyo Haneda city airport, you may come across 11 robots that are busy cleaning the airport facilities and carrying baggage. The airport authorities state that more robots will come to work for Japanese airports in the near future.

It is no coincidence that robots are put to work in Japanese airports. According to a report by Bloomberg, robots are invading Japanese work places as companies grapple with an aging and shrinking labor force. About 26 percent of Japan’s 127 million population are aged over 65, the highest percentage among the top seven industrialized nations. Japan remains among the leaders in the development and use of robots.

Japan Airport Terminal has asked robot manufacturer Cyberdyne to develop additional robots that can be used for security and as airport ushers, helping tourists find their way around the terminal.

Having handled close-on 73 million passengers in 2014, Haneda was Asia’s second-busiest airport of that year and the fourth-busiest in the world, according to the International Air Transport Association.

The Four Seasons Hotel Tokyo is now The Chinzanso Hotel. For nice evenings after a day of business

Tokyo Marriott Hotel is the new name of the Gotenyama Garden Hotel in Tokyo.

Business travellers can now register for a Wi-Fi card that offers free coverage via 45,000 hot spots