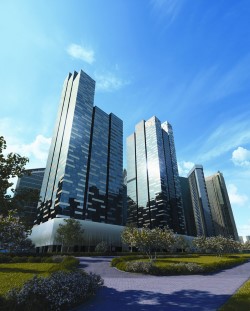 The five-star hotel features 305 guest rooms and suites fitted with glass-to-ceiling windows. Its lobby on the 32nd floor is also the highest hotel lobby in Singapore. The best feature of this new hotel in the heart of the city’s financial district? It must be the views of Marina Bay and the rest of Singapore… "With sweeping city and bay views, our 305 guest rooms and suites are restorative sanctuaries above the city”, as Westin describes it.

Westin used to run The Westin Stamford (now Swissotel The Stamford), once the tallest hotel in the world. Westin’s return to Singapore is part of its major expansion plan for Asia.

In Shanghai, construction companies are building a huge underground hotel.

The Hao Duo Panda Hotel in Emeishan responds to this with the first panda themed hotel.

Chengdu in China is a rising financial hub and becoming more popular.