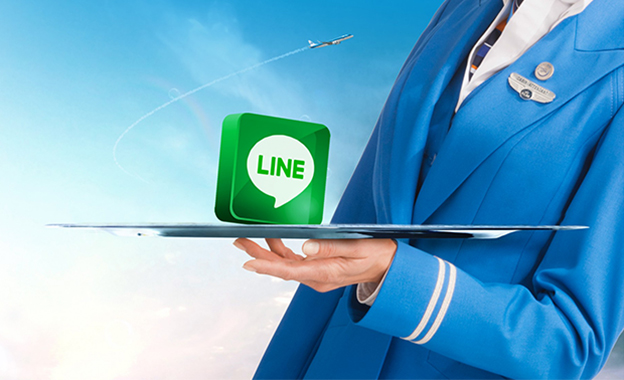 KLM is committed to connecting with its customers on whatever platforms they prefer. We do so via KLM.com and the KLM app, but also via third-party channels. KLM is also looking into voice-activated options, such as Google Home and Amazon Alexa, and we already offer services via Facebook, Twitter, WhatsApp, Messenger, KakaoTalk (Korea) and WeChat (China). LINE is the latest addition to this range.

LINE is a social media platform. It offers voice, video, and chat communication between users, domestically, internationally, and across telecommunication providers. LINE has 82 million active users in its Japanese home market. Most users are from 15 to 34 years old.

To make KLM even more easily accessible to our Japanese customers, we are now present on LINE. When we launched on other popular social media platforms, we saw a huge increase in the number of queries from local customers. This reaffirmed our strategy to be wherever our customers are. That is why we have added LINE as a service channel.

KLM has been a pioneer in social media services and campaigns since 2009. We have more than 28 million friends and followers on a variety of social media. Through these channels, KLM receives more than 180,000 messages a week, 35,000 of which are questions or comments. The world’s largest social media team, consisting of 360 service staff, respond to the messages personally. KLM offers 24/7 customers support on WhatsApp, Facebook Messenger, Twitter, WeChat, KakaoTalk and LINE in Dutch, English, German, Spanish, Portuguese, Italian, French, Chinese, Japanese, and Korean. KLM was the world’s first airline to offer its customers flight documents and status updates via WhatsApp, Messenger, and Twitter. What’s more, it was the first western airline to use the Chinese social media channel WeChat.

KLM officially opened its completely renovated non-Schengen Crown Lounge at Schiphol Airport. The lounge is located between the E and F piers at Schiphol.

From drink to ink – KLM makes tools from PET bottles

KLM is the first airline in the world to recycle PET bottles to make tools for repairing and maintaining its aircraft.