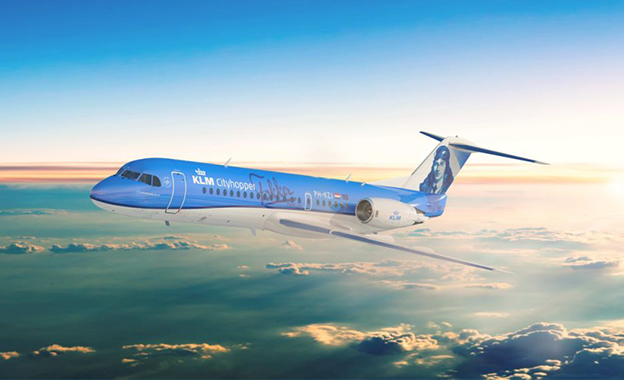 KLM wants to reflect in appropriate style on the end of the 97-year partnership between KLM and Fokker. The phasing out of the Fokker 70 at KLM Cityhopper marks the end of an extraordinary period for the Dutch airline industry.

So many KLM fans would like to be aboard one of the final Fokker flights on 28 October 2017, that we are publishing the flight schedule below. A few seats are still available and can be booked via www.klm.com.

That the very last commercial Fokker flight will depart from London is no coincidence. Soon after the first passenger flights took place on 17 May 1920, two Fokkers joined the KLM fleet as the first passenger aircraft to be owned by KLM: these Fokker IIs bore the registration numbers H-NABC and H-NABD. The first commercial flight with a Fokker II was on 15 September 1920 to London. The arrival of the Fokker 70 from London on 28 October will complete the circle.

KLM will be devoting much social media attention to the departing Fokkers in the run up to 28 October.

KLM Cityhopper began replacing its Fokker fleet with the modern E-Jet, Embraer 190 and Embraer 175+ in 2008. These new aircraft are facilitating further expansion of the existing network, higher flight frequencies, and lower costs. This wide-ranging modernisation means KLM Cityhopper can contribute to a more efficient and environmentally friendly operation in which quality and passenger comfort are top priorities.

For the tenth consecutive time, AIR FRANCE KLM has been ranked as the most sustainable airline on the Dow Jones Sustainability Index (DJSI).

KLM invests in customer and future with new Boeing 787-9

For KLM Royal Dutch Airlines, the introduction of the Boeing 787-9 marks the dawn of a new age for both customers and crew.