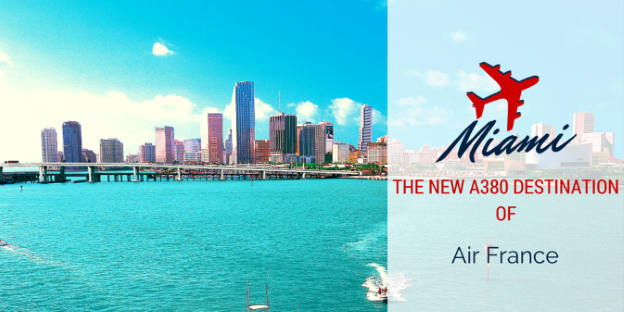 During the 2014-2015 winter season (26 October 2014 – 28 March 2015), Air France will operate up to seven flights a week to Miami from Paris-Charles de Gaulle. From 1 December to the end of the season, all flights will be operated by Airbus A380.In the United States, Miami therefore becomes the third destination served by the largest aircraft in the Air France fleet, after New York and Los Angeles.

The A380, optimum travel comfort

The Air France A380 has 516 seats in four cabins: La Première (9 seats); Business (80 seats); Premium Economy (38 seats) and Economy (389 seats). On board, all passengers enjoy optimal travel comfort and a wider range of amenities. 220 windows provide the cabin with natural light and changing lighting moods help passengers to cross time zones without fatigue. In addition, six bars located throughout the aircraft enable passengers to meet up during the flight.

With a cabin five decibels quieter compared to industry standards, the A380 is particularly quiet aircraft. It also features the latest technology in terms of entertainment and comfort. External images are broadcast live throughout the flight via three cameras housed at the front, underneath and at the rear of the plane.

Book your trip with Air France to Miami!

After Singapore and Jakarta, Air France’s new La Première cabin has been gracing the skies on the New York route since 27 January 2015.

With a strong presence and involvement in this region of the world, AIR FRANCE KLM is developing its long-haul network to these destinations.